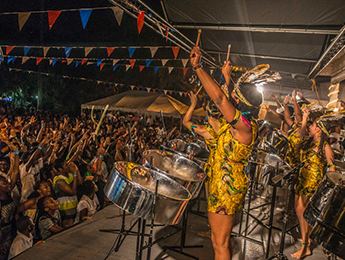 In the heart of Belize’s melodious fusion is the metallic resonance of the Steelpan. This Caribbean instrument was founded in 1964 by the musically savvy Dr. The Honorable Lennox A. Pike 1964 in more than two decades before the independence of the country from its British colony 1981 into the Belize’s culture introduced. Later he was in the “2012 Pan Yaad steel band concert” for his contribution of Steelpan music to Belize, by the President of the National Institute of Culture and History, Mrs. Diane Haylock. In the country’s national September festivals, steelpan music continues to be an anticipated feature, especially at the annual Pan Yaad Steel Band Concert at 7:00, September 9, 2016 at the Marion Jones Sports Complex in Belize City.

This great entertainment of musical perfection offers an electric genre of different local and regional sounds in a warm patriotic ambience. That’s what Steelpan Music is EVERYTHING! From its origins in Trinidad & Tobago, the steelpan was used during the enthusiastic showcases of the celebration; later added to the carnival road marches. It was the fate that introduced the young Mr. Lennox Pike to Steelpan music during his studies at the University of the West Indies (UWI) in Jamaica. His passion as a musician brought him to master his now 19th musical instrument. Mr. Pike’s interest in getting to know all aspects of the Steelpan was a factor for him, who later became a member of the university’s steel band.

Here, other musicians assisted in his search and supplied him with the craftsmanship of the instrument. Later he became the leader of the band and even presented his good friend Colville Young (today’s Governor-General of Belize, His Excellency Sir Colville Norbert Young). After several years and a failed attempt to import the instruments, Dr. Pike here the craft of the pebbles in Belize and was soon at the head of avid musicians and a very receptive local community! As a diverse population that continues to evolve, the love of the Belizians to the Steelpan melodies remains concrete, while the vibrating performances are all bound to hearing! Download the full list of activities taking place throughout September.

View all posts by ajimenez